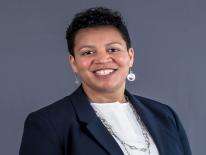 Kristy Love is the Interim Executive Director for the Criminal Justice Coordinating Council (CJCC). She previously served as the Deputy Executive Director for CJCC. CJCC is charged with facilitating information sharing, research and analysis, collaboration and training and technical assistance for justice system agencies in the District of Columbia. Kristy manages the agency’s analytical and policy efforts across a number of priority areas including: combating violent crime, substance abuse treatment and mental health services, adult reentry, grants planning, and juvenile justice. Kristy also facilitates cross-sector collaboration among juvenile justice, education, and social service agencies by convening several committees and workgroups to help ensure positive outcomes for system-involved and at-risk youth. She is also responsible for overseeing a number of the agency’s administrative functions, including staff training and development, ethics, FOIA, and strategic planning and performance management.

Prior to joining CJCC, Kristy was an Assistant Director in the Homeland Security and Justice team at the U.S. Government Accountability Office (GAO), where she oversaw evaluations of federally-funded criminal justice, juvenile justice, intelligence sharing and homeland security programs and initiatives. During her time at GAO, Kristy was detailed to the Senate Committee on Homeland Security and Governmental Affairs, where her portfolio included oversight of the Department of Homeland Security, security clearance reform and visa issuance. Kristy was awarded the GAO Meritorious Service Award for her contributions to GAO’s oversight of the implementation of the Sex Offender Registration and Notification Act and passenger screening procedures implemented by the Transportation Security Administration (TSA) following the 9/11 terrorist attacks. Kristy also served as the Diversity and Inclusion coordinator for the nearly 180 staff members in the Homeland Security and Justice team.

Kristy received her BA in mathematics and political science from the University of Rochester and her MPA from the Maxwell School of Citizenship and Public Affairs at Syracuse University. Kristy is a native of Prince George’s County, Maryland, and she has been a resident of the District of Columbia since 2003. She currently lives in Ward 7 with her husband and daughter.